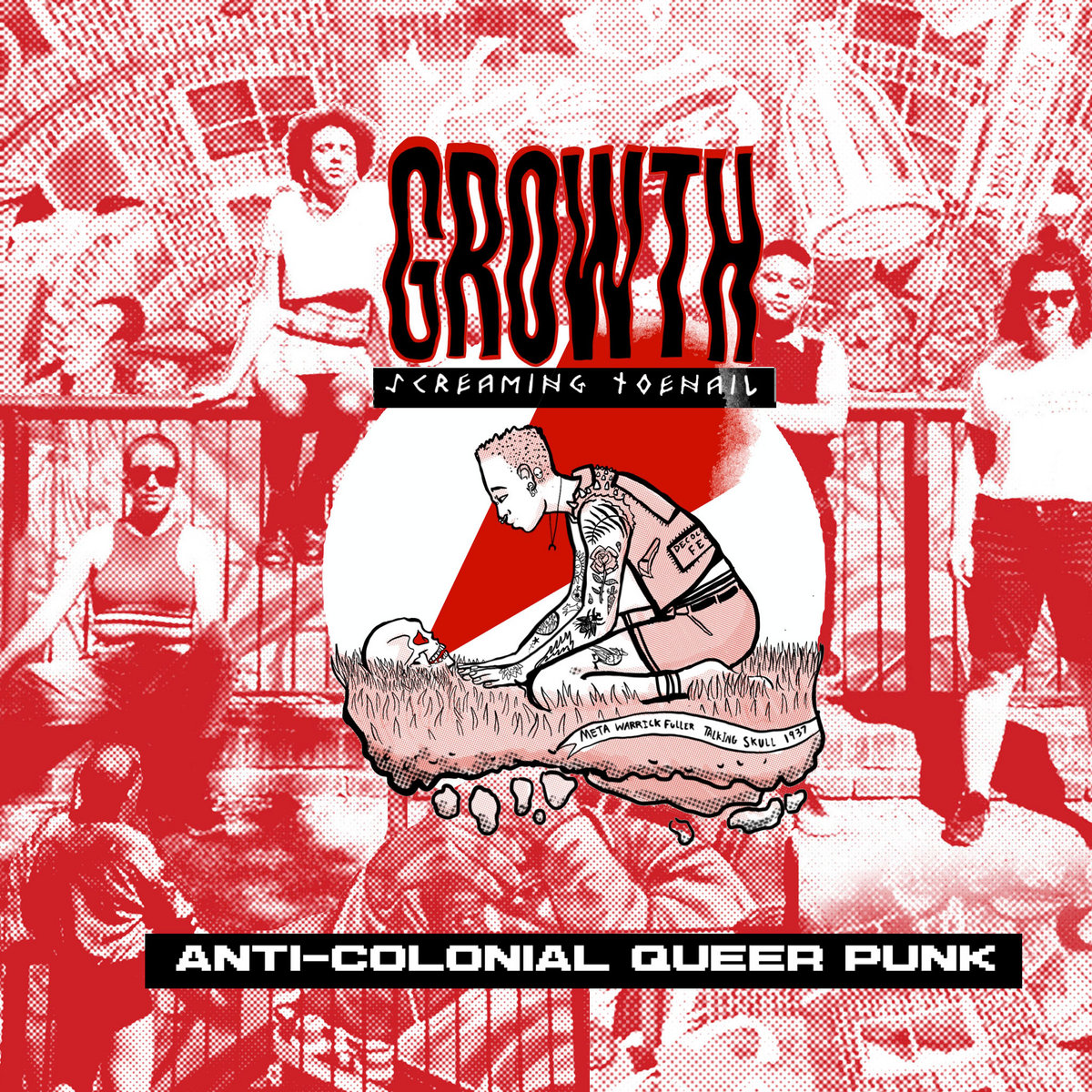 A series of voices over a sustained buzzing. First starts a documentary sounding clip of a knowing voice calmly explaining the hybrid Africanised honey bee before being interrupted by Michael Caine. Caine - an icon of post-war British cinema and a personification of a particular view of Englishness, whose first big role was in a film about the Anglo-Zulu war - is sampled here from a late '70s disaster movie. He talks impassionedly about battling the aforementioned bees as they terrorise Texas. This is followed by the voice of former Conservative Prime Minister David Cameron being interviewed in 2015. He refers to the refugees escaping war and persecution by travelling across the Mediterranean - and by insinuation migrants in general - as a swarm themselves. So begins 'Growth'; the debut album by London's self-described anti-colonial queer punks Screaming Toenail.

As intro track 'Very Testing' segues easily into 'Swarm', the two form as clearly stated a position as a band can make. With the hissing and string scraping leading to a bouncing riff over which frontperson Jacob V Joyce yelps "I'm a good worker, I'm a good bee, say welcome and humble me". Their wordplay takes the dehumanising language in right wing and neoliberal talking points to absurdist extremes with a sardonic grin. "And if I die for this empire, when my body's laid to rest, you can tell her majesty I surrender all autonomy." They follow the metaphor further; tying in Britain's media and politicians encouraging adoration for a sustained vision of itself as a 'great' royal led superpower.

Screaming Toenail fit neatly into the more glam end of early punk rock and the danceable strains of post-punk. They cite X-Ray Spex and Le Tigre as influences, and at times bring to mind bands like Gang of Four and ESG. Their use of samples for context, while more common in other genres, is here reminiscent of Chumbawumba or ONSIND. Whereas band members' links to local collectives like Decolonise Fest (a yearly punk festival putting on only bands featuring people of colour) and First Timers (who put on series' of workshops culminating in gigs where every band is making their debut) align them with Big Joanie and Charmpit. The album was also recorded by Margo Broom at Hermitage Works Studios, whose other credits include the debut album for the former as well as releases by Fat White Family and Meatraffle.

On 'White Saviour' they take aim at the modern equivalent of the kind of western imperialism that Kipling advocated for in 'White Man's Burden', comparing it to voluntourism and celebrity transracial adopters. Like a lot of the album's best moments it builds from moody atmospherics to blasts of fuzz guitar and palm muted chords. 'Define and Conquer' and 'IOU' cover deft dismissals of assimilation and a yearning to reclaim histories flattened by an outsider's recording.

'Sever' starts with looped electronics that, when combined with bassist Natasha and drummer Alice Moon's menacing grooves, give off an early goth vibe in the vein of the Banshees or Bauhaus. 'Growth' was recorded with now departed founding guitarist Niadzi Muzira and the album is marked by her distinctive Daniel Ash meets Eddie Hazel lead playing. 'Crystal Queer' begins with a sample of Eartha Kitt denying compromise, the lyrics speak to being sick of (white) social expectations "taking up space" in one's head, preserving the "sacred stone" of your energy and reclaiming time.

Live set highlight 'Get Cute' utilises quirky vocal interplay for an ode to someone's adorability, before 'Giant Woman' - a cover of a song from queer cult favourite Steven Universe with adapted lyrics - ends the album with the band chanting the names of black women whose politics they admire. Their list includes squatter and British Black Panther Olive Morris, 'Why I'm No Longer Talking to White People About Race' author Reni Eddo-Lodge, and television writer and trans rights activist Janet Mock.

After two promising self-released EPs, 'Growth' - a name which also references the body horror in their own moniker and a certain well-worn gif from the HBO comedy Insecure - shows just that. It's a concise mission statement displaying the band's principles and influences (both intellectual and musical), as well as hinting at where they might head next.